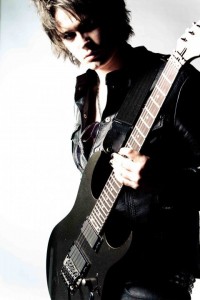 As a lead guitarist/shredder it is very easy to be consumed with exercises/increasing speed and forget about (or not have time to practice) expression and musicality. A piece doesn’t have to be technically challenging for it to be impressive and more often than not the simplest melodies are the most widely appreciated. I have arranged guitar duets of 3 songs which I have found to be melodically expressive and which I believe to evoke emotion in the listener. The parts of the duos are ‘Rhythm’ and ‘Lead’ so it is simple enough to observe what chord changes are happening over which notes of the melody in order to subsume those ideas into your own musical palette. For example, bar 5 of “Pavane” shows how you can progress a dominant V chord scenario by lowering the root note by a tone. Take note of the harmony, note choice and rhythm that make each melodic phrase effective.

You should find download links for Guitar Pro and PDF files of the songs above.

Chopin’s economy of note choice and interesting chord progressions invoke aberrant and lugubrious emotions in the listener and this piece is a brilliant example of his style.

This piece was composed by Chopin in 1830 and dedicated to his older sister Ludwika. It was not published until 26 years after his death. It was famously performed by holocaust survivor Natalia Karp for notorious Nazi Commandant Amon Goeth at Kraków-Płaszów concentration camp. So impressed was Goeth of the performance that he spared the lives of her and her sister. This ability of “Nocturne in C♯ Minor” to evoke emotion has led to it being used in many films and TV series.

The chord progression of the first section is as follows:

If you behold a concert pianist playing this piece you can see that a lot of the poignancy comes from the dynamics not just in the melody but in the broken chords of the left hand (rhythm part). The tempo of the piece is also not fixed and slows down/speeds back up when the melody dictates, speeding up slightly during the trills of the main part gives the emotional aspect of the piece an extra dimension but it is hard to clarify why. In general speed is added to music to increase intensity so perhaps the tempo increase during this poignant melodic phrase serves to evoke a subtle feeling of ever intensifying sadness. Dynamic and tempo values increasing and decreasing at certain times have long been known to give music an extra dimension. It is possibly this subtle feature which separates a piece from being merely good music and being good music that has the efficacy to evoke powerful emotions.

The runs at the end are supposed to be played legato and airy. Avoid the temptation to do an aggressive alternate picked shred run. On this occasion it is not about showing off, it’s about the emotion, and the emotion is one of haunting dreamlike melancholy.

Considering Chopin never published this piece in his lifetime, it is confounding to speculate what it was about this magnificent piece he considered so unacceptable.

It is not very often (perhaps twice a year) that I hear a new melody or song which I really connect to on an emotional level. Whenever it does happen I get very excited. This piece is on the soundtrack of the Nintendo DS game “Professor Layton and the Diabolical Box”. I was so excited by this song that I learnt it on piano and arranged a guitar duet of it.

The real originality of this song comes in its chord progressions. The frequent key changes keep the listener engaged and are so much more interesting than the standard progressions you hear every day in more popular styles. The solo section in particular is reminiscent of many musical theatre scores with unorthodox progressions and extended chords, the melody soaring higher and in a more lyrical fashion than the rest of the piece.

The chord progression of the ‘solo’ mid section is as follows:

If you are unfamiliar with the key of C♯ major then studying this piece should help you to become indelibly familiar with it.

“Pavane” or “Pavane in F♯ minor, Op. 50” is a piece written by French composer Gabriel Faure in 1887. It first came to my attention as background music at a climactic scene in The Sopranos episode “Pax Soprana” when a section of the main theme is used in an instrumental version of the Xzibit song “Paparazzi”.

The first part of the main theme follows the progression:

Faure’s addition of 7ths to his accompaniment stops the fairly standard chord progression from sounding brackish.

The melody itself, though haunting like Chopin’s Nocturne, is actually just moving up and down the scale by one interval at a time, other than the leap of a third on two occasions in the 4 bar passage. This is a very universal style of melody writing which generally tend to move up and down in scale intervals or arpeggios for the most part.

The rhythm of the melody is nothing elaborate, held dotted notes interspersed with 2 beats of quavers mirroring the rhythm part. What it is that makes this melody so astounding, it seems, is somewhat a mystery, it is hard to explain by musical analysis at least.

I haven’t gone into exorbitant detail about how music evokes emotion because it is ostensibly ineffable and I believe the answers to any questions you have about these great pieces of music are only to be found in the notation and the music itself. Listen to them, play them, dissect them and digest them.

Fraser Edwards is the lead guitarist of Scottish power metal band Ascension. Their debut album Far Beyond The Stars is out now on Spiritual Beast/Universal Music You can also check Fraser’s personal website for additional guitar lessons.