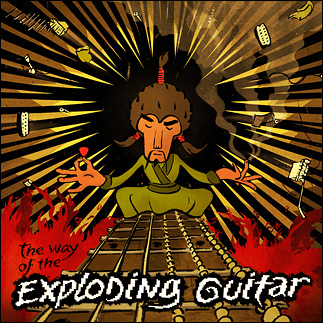 Mr. Fastfinger has such a quirky and innovative way of playing, and manages to use shred techniques to get a really wide range of interesting and cool sounds from the guitar. He has a very distinct sound that you would instantly recognise as being Mr.Fastfinger, which is something most guitarists strive to achieve yet fail to do. In addition, the album has a wide range of subtle sound effects mixed with the music that while insignificant on their own, really add to the smoothness and overall listening experience of the album.

The album features 14 tracks of pure unadulterated guitar wizardry, featuring smooth legato solos laid over the top of upbeat rhythms and many oriental sounding compositions. Pacing of the album is excellent, with plenty of variations in tempo and groove to keep the listener on their toes. While the album is fun and lively, there’s also a real depth to the writing – “Creatures of the Midnight” is more relaxed, calm and very melodic, and also one of the best tracks on the album.

Super cool riffs appear all over the album, along with a huge range of upbeat melodies that make the songs really enjoyable to listen to. My favourite Mr. Fastfinger track ‘Epic’ appears on this album, and is an even longer version than the one found on the Melodic Soloists CD. Great! Other tracks on the album such as The Ninjas (I and II) have instantly become favourites of mine, solid riffs and the cheekiest of solos make for some awesome listening.

This CD is one of the best shred albums released lately, and is definitely one of my picks to buy for 2010. If you’re just getting into virtuoso guitar and are looking for some albums to buy, this should be one of the first on your shopping list. Highly recommended.