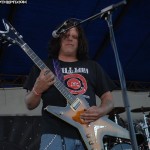 Today I’m going to talk about triad arpeggios and show you a few practical uses to hopefully help you incorporate them into your solos in an easy and efficient way. First, lets define a triad arpeggio. Well quite simply a triad arpeggio is built from a 3 note chord (triad) which is composed of the Root , 3rd and 5th tones of the scale from which it is derived. For example: In the key of C Major, a C Major triad would be made from the notes

I am going to start by showing you some examples of how to play all the triad arpeggios in the diatonic key of E Major. The triads in E major would be as follows:

O.K. now that we know the basic shapes we can now expand on this basic idea.

This example shows the exact same outline as the first but it extends up to the octave (root) on each triad and then descends back down to the third.

Finally were going to take example 2 and incorporate some tapping into the lick.

Well I hope you enjoyed this lesson and more importantly were able to get something out of it. Till next time, stay focused on your journey. You can also visit my website for more info: www.myspace.com/robblotta

Robb Lotta has toured with Joey Belladonna of Anthrax and is currently touring and recording with national recording artist Fallen Angel. He is also a highly sought after teacher in his hometown of Rochester, N.Y.