‹ prev next ›
0
Tapping into 8 finger tapping (how to creatively use the tapping technique)
February 11, 2013 SinniK Al Lessons

8 finger tapping is one of the so called advanced guitar techniques. However, this doesn’t necessarily mean that it’s something harder to develop than, say, advanced alternate picking but that it is a bit more unusual technique and hence feels unnatural in the beginning. This is mostly due to the fact that our picking hand is no more holding the pick and behaves differently, in a piano-like manner compared to its traditional role. If it feels so to you, I strongly recommend and encourage you to check the introductory exercises I’ve included in a previous article that you can also find in the downloads section of my site.

Some people tend to believe that this technique is an exclusive shred-tool or a simple noodle effect, both of which pure understatements that tend to shade its usefulness and the unique, fluid color it can bring to our lines and melodies along with the potential to execute large intervals, polyphonic licks and rich, extensive lateral movement.

In this article, I aspire to show you some ways in which you can use this technique together with the many new paths it can pave for your playing. All examples are taken from guitar solos from the SlavEATgoD’s “Blank Core Inn” CD.

1) Pleading the fourth (and so forth…) 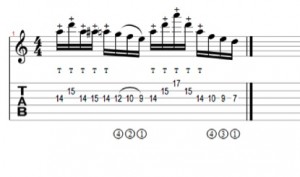 Obviously, the melodic interval of fourth, being in exactly the same fret position of two adjacent strings (the only exception being G and B), is not the friendliest one to produce with most techniques. Especially, if one wants to play some repetitive fourths with a pedal tone and so on, is going to have a hard time with the finger rolls, rapid alternate picking needed, exhausting muting and finger stretches as well.

This is not the case with the 8 finger tapping though, which is the perfect approach for such lines as you can hear in the next example. This lick is written in C Aeolian (Natural Minor) and the (normally) fretting hand is in its first box while our (ex-)picking hand is in the third box. Notice how easy it is to play repeating fourths with your right hand and if you remain a doubting Thomas, just try to play the very same lick using a non tapping approach. This lick is from SlavEATgoD’s track called “The Quitter”

Also, for a demonstration of this specific lick and some more slavEATgoD’s solos you can go to this video demostration in 1:19 approximately. This lick as well as the others on this video and article are played with a Gibson SG special using a dropped C tuning. However, no low C string is used and so everything is also applicable in standard tuning as well. In case you feel uncomfortable with the tricky picking hand fingerings, you can practice them separately before applying them to the whole lick.

Using a pedal tone is a very effective way to create intense licks both in a neoclassical manner (Vinnie Moore, Yngwie Malmsteen, Richie Blackmore, etc.) as well as in a more fusion/modern rock approach like Eric Johnson and Shawn Lane. However, a very common limitation for us guitar players (unlike the bloody keyboardists) is that the only way to play such licks in a speedy way is to either use an open string or just use the same pedal tone throughout.

Yet, with 8-finger tapping we can easily overcome this difficulty and create some really spicy and melodious licks (eat that Jens Johansson) like the following one . This lick is again in C Aeolian and our ex-picking hand taps in the second box, while our fretting hand plays in the fourth one. Notice how easy it is to smoothly change the pedal tones as unpredictably as you wish and thus you can also transpose some familiar open string guitar licks in all tonalities. This lick can also be done by reversing the hand roles, yet this brings up some very serious muting difficulties.

This lick is from the same solo as the previous one and can be found here (1:23)

It’s pretty obvious to realize that the 8 finger tapping technique IS a truly symmetrical technique since the one hand is the mirror image of the other. Therefore, the use of symmetrical shapes is made quite easy and can be proven very effective as well.

A good example is the following lick, in which both hands execute an Eb diminished 7th passage between which there is a tritone interval. As it is widely known, the diminished 7th chord is the epitome of symmetry and therefore far too tempting NOT to use all fingers. Similarly, with this technique we can also take advantage of the symmetry in shapes such as the whole tone scale, the diminished scales and of course the chromatic scale so as to create various licks and ideas.

This lick is taken from my guitar solo of SlavEATgoD’s self-titled track and it’s from the band’s debut CD, “Blank Core Inn” . For a video demonstration of the lick, you can check the same video (0:18 approximately)

That’s all for the time being. I hope you enjoyed this article. Get ready for some more blazing tapping licks that will be included in future articles. See ya then 🙂