‹ prev next ›
0
Why Yngwie Malmsteen Is Underrated And How This Can Help You As A Guitarist
January 13, 2013 Tom Hess Lessons 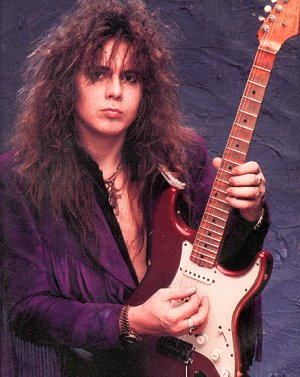 Although well known in the metal guitar playing community, Yngwie Malmsteen is often left out of the discussion when it comes to “the most important guitar players of all time”. The truth is, there is a lot to learn when it comes to understanding why he is so underrated by many guitarists. For example, a lot of guitarists entirely miss out on the value Yngwie brings to guitar, saying things like:

· Yngwie has not sold as many records as other guitar players.

· Yngwie plays too fast and doesn’t know how to play emotionally with good melody.

· Since the 1980’s, Yngwie’s music has not changed or progressed in any notable manner.

Now, before I continue on with the rest of this article, I want to mention that the first point made above is entirely off topic to what I will be discussing (the amount of albums a guitarist sells has no impact on their overall importance in the guitar playing community as a whole). Additionally, the other two points are NOT true at all and you will find out why shortly as you read below.

My goal with this article is not to turn you into an Yngwie fan. Instead, I want you to understand the reasons behind why Yngwie is such an important figure in the history of great musicians and influence to the current (and future) generation of guitar players. Once you understand what goes into his guitar playing that makes him so great, you can then begin to utilize this knowledge to improve and enhance your own guitar playing.

The following is a small list of innovative musical ideas that Yngwie Malmsteen has brought to the table in the guitar playing community that most guitarists do not give him his due respect for:

Integration Of Lead Guitar Techniques: It is well accepted by guitarists that Yngwie is a very accomplished technical guitar player and the fact is most people write him off as simply being a “shredder”. However, in reality he is not merely ‘another’ shred guitarist but rather THE guitarist who raised the bar for virtuosity in lead guitar playing to an entirely new level. This point alone is enough to place Yngwie into the category of all time best…

The truth is, many guitar players (of Yngwie’s time) did not take the time to master all the possible guitar techniques that they could use to make music. Consider techniques such as tapping, sweep picking, alternate picking, string skipping, speed picking, not to mention subtle techniques like playing with articulation and fluent guitar phrasing. Think about how long these guitar techniques were available to be mastered before someone actually came along and mastered them all on a technical and musical level. In most cases, these guitar techniques took the span of many decades to get to the point to where they were being played at a level of true mastery. Although there were guitarists who were playing with some of these techniques at various levels of proficiency, there was no guitarist (before Yngwie Malmsteen) who had achieved a level of virtuosity for ALL of them in his guitar playing.

Yngwie was not merely ‘another shredder’, but a true pioneer when it comes to guitar technique. This is one of the most common oversights made by guitar players who mistakenly place all of the techniques he played into the all encompassing category of “Guitar technique” and move on as if there is nothing more to learn from him.

You might not be a listener of Yngwie’s music, but even if that is the case you can still gain great insight from his ability to combine together a large variety of guitar techniques. It is crucial for you to be able to integrate various techniques in a smooth manner throughout your music regardless of the musical style you play in. Note that when I say ‘integrate’ guitar techniques, I am not referring to practicing them separately on their own like the majority of guitarists. Find out more on how to combine guitar techniques together by watching this video about how to practice guitar.

Vibrato Technique: Without a doubt, Yngwie Malmsteen is a shining example of a guitar player with excellent vibrato technique. Keeping this in mind, know that Yngwie’s guitar idols did NOT play vibrato like him. Many guitarists completely overlook his ability to play expressive vibrato claiming that his style “lacks feeling”. This is commonly paired together with the claim that he plays “too many notes”. However, the truth is that Yngwie is a master of expressive guitar playing and can say much more with a single note than most guitarists can say with an entire guitar solo. To hear proof of this, check out his guitar playing on the first song of “Rising Force” and compare it to the playing of any other guitarist who is commonly considered to be a ‘more expressive’ player than Yngwie.

As you are doing this, observe how Yngwie uses great detail in his vibrato by utilizing subtle nuances of the technique (through balance, changing speed, using wide and narrow depth, precision of timing, etc.) to generate highly expressive musical emotion with just one note. Compare this to most other guitarists who rarely consider the subtleties of vibrato technique and cannot truly understand the difference between everyday vibrato and virtuoso vibrato.

When it comes to great guitar phrasing, solid vibrato technique is absolutely essential. Observe your own vibrato closely to see if you can identify any of the subtleties mentioned above. As a test for your abilities, play a single note on guitar and see if you can create a ‘variety’ of highly musical and emotions expressions from by using vibrato on just that one note. If you are unable to do this, it means you still have a good amount of practice to do on your vibrato. To become a more expressive guitar player by using vibrato in your melodies, check out this free guitar vibrato video.

Improvising: Similar to great jazz musicians, Yngwie has mastered the ability to improvise great guitar melodies and ideas. Although he does not commonly improvise over harmonies consisting of complex jazz chord progressions, Yngwie’s ability to create intense emotion by maximizing the expressive effect of each chord is unmatched. This is much more complex than merely understanding “which note goes over which chord”. When you truly master improvisation (as Yngwie Malmsteen has), you will know the feeling and emotion that will come with the notes that are played over each chord… ‘before’ the chord is even played. This way you can adapt your playing in the moment to create whatever emotion you wish to express.

It’s noteworthy as well to understand that Yngwie frequently makes improvisations to create new versions of his old guitar solos with perfect execution. This is unlike most guitarists, who usually play the same guitar solo in the exact same manner every time they play it.

No matter what musical genre you like most, knowing how to hear the emotions that will be created in your improvisation before the chord is played is a crucial skill to develop if you want to become an expressive guitar player. To learn more, check out this video on how to write metal guitar solos.

Music Composing Skills: Yngwie has brought a lot to the rock guitar community through his ability to write music that utilizes intelligent and innovative use of the foundational songwriting principles. It is true that these principles have been used for hundreds of years prior to his music; however, no one had utilized them in quite the same manner as him outside of ‘some’ jazz musicians and modern classical composers.

The songwriting techniques that Yngwie uses are not exclusive only to his style of music; in fact, they can be used effectively in any style of music. To learn how to apply them to your specific style of guitar, watch this video about how to play creative guitar chords.

What action should you take now?

1. Listen to Yngwie’s songs (yes, even if you are not a big fan of how he plays guitar). If you are already into his music, find any one of his albums (I recommend his earlier releases) and complete the next steps.

2. Listen closely and identify the subtle nuances that make Yngwie an excellent guitarist (use the ideas mentioned in this article as a reference). If you are not sure how some of the more advanced musical ideas utilized in Yngwie’s playing work (such as musical expression, songwriting techniques and improvisation in different keys), locate a guitar teacher who can help you understand them in great detail and use them to enhance your own guitar playing .

3. Start analyzing your own guitar playing and determine your level of mastery for the ideas mentioned throughout this article. Although your musical style may be totally different than that of Yngwie Malmsteen, it will still be to your benefit to master the ideas of this article in a manner that works for the music you play. Make an evaluation of your progress toward mastering the ideas in this article and do what needs to get done to get better in the areas where you need most improvement.

By writing this article, I not am attempting to necessarily make you a fan of Yngwie; but to help you gain new musical insights that you likely have not yet considered. If you do not like Yngwie’s music after studying him in detail, that is totally fine. However, understand that by observing the subtle nuances in Yngwie’s music as described in this article, you will be able to get much more value out of the music of other guitar players. This will help you become a better guitarist and reach a new level in your overall musicianship.

Tom Hess is a highly successful guitar teacher, recording artist and the guitar player for the band Rhapsody Of Fire. He teaches guitar players from all over the world in his online guitar lessons. Visit his website tomhess.net to get free guitar playing resources and to read more guitar playing articles.