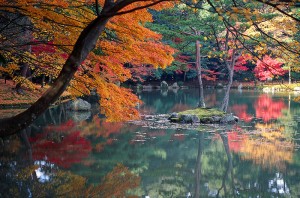 Hi this time I wish to talk about five scales that have become more or less known among guitarists; the first time I had heard of exotic sounds on electric guitar was when I listen to a record of  the scorpions with guitar master Uli John Roth, it was the Tokyo Tapes Live double album. Then a record of UFO with Michael Schenker,  then an Accept record called Kaizokuban, And the climax of this came to me with bands such as Cacophony and the records of Marty Friedman and Jason Becker. I’m very interested in exotic scales and exotic sounds so I started to search information about exotic scales in books and videos.

Then David T Chastain came to Mexico and played some Hungarian minor improvisations and he gave me a little booklet with information about a lot of formulas for exotic scales which made me very happy. I still remember that day when I met Michael Harris and David T Chastain. They are super excellent guitarists, heroes of guitarists around the world and the best thing is that they are excellent people too.

OK back to the scales, with David I learnt a Japanese scale called the “Kumoi” scale. It is a five tone scale that has a very brilliant sound and that I practiced a lot until now, when I saw the video of Marty Friedman and he teaches a Japanese scale that is the same as the scale David taught me. Then I got another booklet with 16 exotic scales and there came three scales called Kumoi, Hirajoshi and Iwato among others from China, Hungary, Egypt and Greece etc.
Well I began to practice these scales to learn their positions on the fret board. While I was making diagrams of two and three note per string positions, I discovered something very interesting; the positions of each scale were exactly identical to each other, just with different notes, and then I think “Voila! They are modes of the same scale!”

Various positions on A tonality 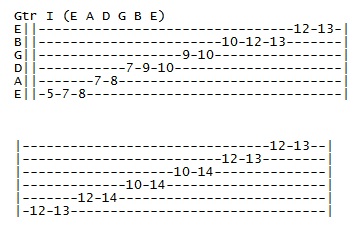 OK, now we will to look at another Japanese scale commonly known as Kumoi. I know this scale as kumoi, but in my  research I’ve found that his real name is Hon Kumoi Shiouzhi. In reality, the name of shiouzhi is referred to one tuning of a Japanese stringed instrument known as  Koto, by the way  the names Hira, Kumoi, Kokin and Hon Kumoi are tunings with certain intervallic distances from string  to string). The Kumoi scale is the first Japanese scale that I learned, it sounds very good and exotic, its intervallic structure is: H-2-W-H-2. This means that our first intervallic distance is of a half tone, our second intervallic distance is of two whole tones, our third distance is of a whole tone, our fourth distance is of a half tone and finally our last distance in this scale is of two whole tones. In the tonality of A, this scale has the following tones: A, Bb, D, E, F A
it has the following formula:1, b2, 4, 5, b6. Which means: 1=root, b2=minor second, 4= perfect fourth, 5= perfect fifth, b6 is a minor sixth.
The hon kumoi shiouzhi in A tonality: 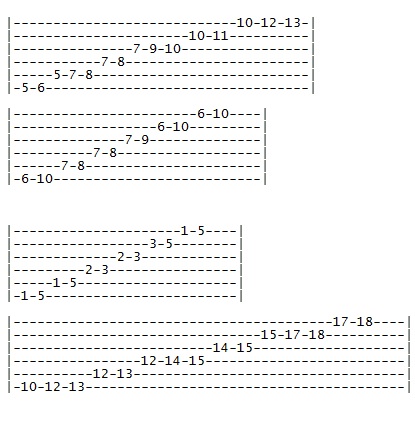 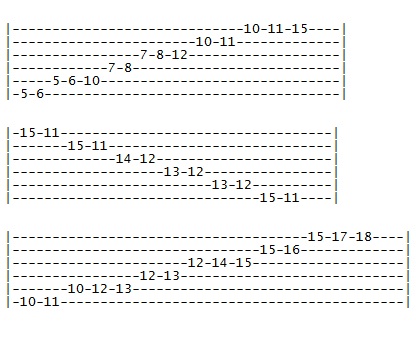 4. The (real) Kumoi Scale (The sound of the Samurai)

OK, there exists another two Japanese scales derived from the Hirajoshi Scale, for example, I need to present to you a scale that, with the same set of notes (five notes). The same set of intervals completes an octave, that’s the case of our new friend that comes with intervals arranged in a manner that starts on the interval of 2 whole tones. Well, the scale I’m presenting to you comes with this intervallic structure: 2-H-2-W-H.

If you think a little you will realise that it is a mode of the Hirajoshi scale, I named this scale: Kumoi – The Sound of the Samurai, because it reminds me the noble warriors of Japan, and makes for something a bit different to the Hon Kumoi scale.

The formula for this scale is 1-3-4-6-7, which means root, major third, perfect fourth, major sixth and major seventh.

Positions on A tonality: 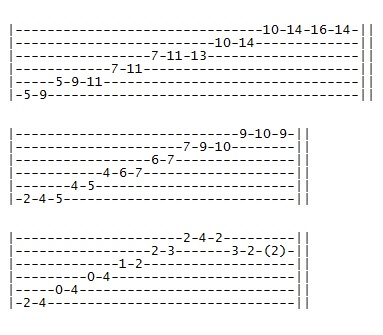 The formula for this scale is:  1-3-#4-5-7, this means: root, major third, augmented fourth, perfect fifth and major seventh.
In the tonality if  A it  is: A-C#-D#-E-G#. I haven’t found the name of this scale, or at least a Japanese name, in a scale dictionary I got from Toni Lloret, it is named the ‘Chinese scale’ or Hindu scale Raga Amritavarsini.

The Chinese Scale (5th mode of the Hirajoshi scale) or The Raga Amritavarsini on A tonality: 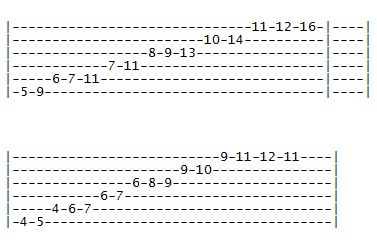 (The light of the Moon over our Japanese scales)

According to a record I have of Japanese folk melodies, “Kojo No Tsuki” means “The light of the Moon over the Ruined Castle.” Now will we see the light of the Moon? First, we need to compare the intervallic structures of every scale we have learned:

The Hirajoshi scale has W-H-2-H-2 and is the first mode.

The Iwato scale begins on the H interval of the Hirajoshi, and in the same order we have H-2-H-2-W and it is the second mode of our scale.

The Kumoi scale begins on the 2 interval of the Iwato scale, and in the same order now we have 2-H-2-W-H and it is the third mode of our scale.

The Hon Kumoi Shiouzhi scale begins on the H interval of our Kumoi scale and in the same order now we have H-2-W-H-2 and it is the fourth mode of our scale.

Finally, the Chinese scale begins on the 2 interval of our Hon Kumoi Shiouzhi scale, and keeps the same order of intervals, just the first interval now is the last and now we have 2-W-H-2-H. It is our fifth and last mode of the Hirajoshi scale.

Just in case of any doubt:

OK. Now you have the formulas and maybe some positions of these Japanese scales, but you need to take this information and develop it to it’s maximum potential. You can derive chords from all the five scales and compare them, you can mix these scales with another scales as major or minor scales, for example now you can study these scales to incorporate to your arsenal of tools for composition. They provide innumerable elements and options.

Thanks to Shredaholic, I hope these types of lessons help you as an aspiring musician, I recommend you to view all the lessons on this site because they are excellent lessons. If you like this lesson I wish to make the second part, with topics using these scales in combination with our “Well tempered clavier scales”